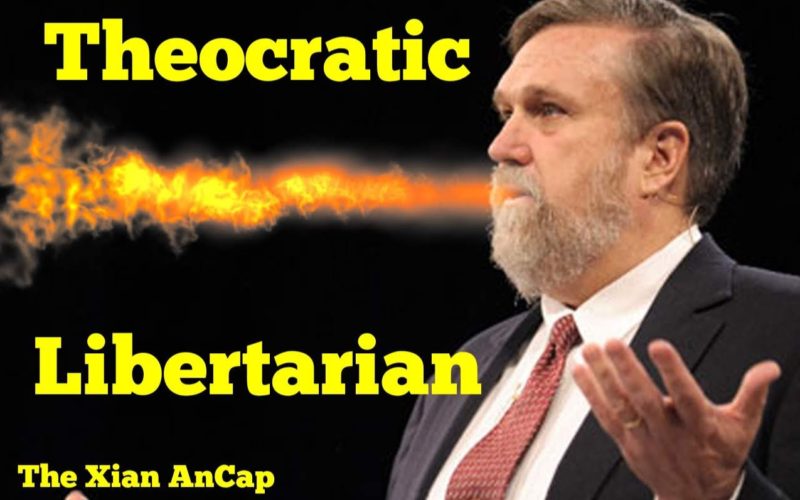 In rather uncanny providence, Douglas Wilson provided some unanticipated fodder for the launch of The Xian AnCap. As soon as I read his appeal to anarcho-libertarians, I knew we'd have some fun. Since our blogging philosophy limits the length of our posts to around 500 words, I'll respond in two articles to a few notable assertions. I hope to clarify things for those of Wilson's readers who may be “tempted” or “enticed” by his over-generalization of libertarianism. Take care. Wilson, the ironically self-professed “theocratic libertarian,” lays claim to libertarianism where he believes it overlaps with conservative ideas. While there is much that libertarians and conservatives agree upon, we don't exactly have the same view of free market capitalism. Wilson stated that for the sale of lawful products, he is, for all intents and purposes, libertarian. However, this caveat of “lawful products” puts him outside the libertarian circle.

What defines libertarianism, in particular anarcho-libertarianism, is its view of a pure free market, that is to say, an unregulated, unrestricted market free of any State intervention whatsoever. Later in his article he rebuffs casinos and pot shops, demonstrating he is not libertarian at all in his economic theory, for an economic theory of free market capitalism is purely based upon the voluntary mutual exchange between consenting individuals without the influence or restriction or regulation of any third-party such as the State. This is not to imply that voluntary mutual exchange is never sinful (e.g., prostitution), however, the State has no authority to intervene between such mutually consensual exchanges.

Do you love your country?

In Wilson’s first of three counterpoints to libertarianism, he asks the question:

Do you love your country?

He immediately dismisses any libertarian response having concerns of the nation-state as illegitimate, and assumingly unloving. He then conflates love of nation (country? its people?) with love of State. He uses a number of Scriptures regarding covenantal national Israel and the future Kingdom to proof-text State motherhood, as if the State is the people's caretaker, nurturer, disciplinary, and provider (things more in common with communism, e.g., “Mother Russia”). But love for country and detestation of an immoral State are not mutually exclusive. One can, and should, be about both — that is, if we love our neighbor.

...that all Men are created equal, that they are endowed by their Creator with certain unalienable Rights, that among these are Life, Liberty, and Property…).

To be sure, to love “America” more than liberty is to not only undercut America’s founding principles, but it is to make an idol of America over biblical principles. If we love the American people and “the land,” we will desire its good without imposing our collective will (via “The People™”) on the choices Americans make.

Next time we’ll tackle Wilson’s points regarding the corruption of liberty and good, godly rule. In the meantime, T Neal will serve up his response to Wilson’s article.