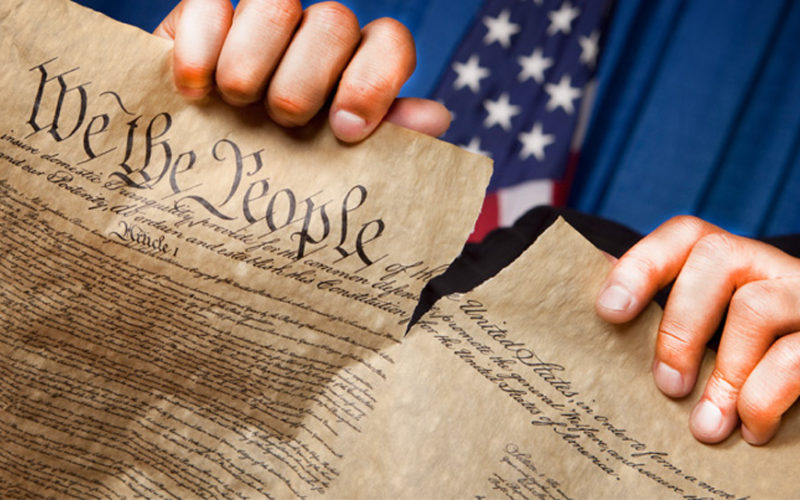 I had a nice chuckle on my Monday morning commute when the radio informed me that this week is Constitution Week. The night before I had just finished Hans-Hermann Hoppe’s Democracy: The God That Failed. I also knew that Monday afternoon I would be finishing Tom Woods' Nullification: How to Resist Federal Tyranny in the 21st Century. This was all amusing to me to say the least.

The evolution of my political philosophy has been fascinating. Once a staunch conservative Republican who was as pro-Constitution and nationalistic as the next NeoCon (think Sean Hannity or Ann Coulter), I now identify with the anti-federalist Founding Fathers who feared the implications of the pro-centralist Constitution. I now get what Hoppe meant by:

Shocking, huh? Some are likely responding with, “what in tarnation?” “How does that even make sense?” Well, the poignant assertion is taken from Hoppe’s aforementioned work where he explains:

...the American Constitution must be recognized for what it is - an error. As the Declaration of Independence noted, government is supposed to protect life, liberty, and the pursuit of happiness. Yet in granting government the power to tax and legislate without consent, the Constitution cannot possibly assure this goal but is instead the very instrument for invading and destroying the rights to life, liberty, and the pursuit of happiness. It is absurd to believe that an agency which may tax without consent can be a property protector. Likewise, it is absurd to believe that an agency with legislative powers can preserve law and order. Rather, it must be recognized that the Constitution is itself unconstitutional, i.e., incompatible with the very doctrine of natural human rights that inspired the American Revolution. Indeed, no one in his right mind would agree to a contract that allowed one’s alleged protector to determine unilaterally - without one’s consent - and irrevocably - without the possibility of exit - how much to charge for protection; and no one in his right mind would agree to an irrevocable contract which granted one’s alleged protector the right to ultimate decision making regarding one’s own person and property, i.e., of unilateral lawmaking.

Indeed, the Constitution is a violation upon the cherished document that precedes it, the Declaration of Independence. In institutionalizing legislation and the power to tax without consent, the Constitution violates individual property rights, including, as it turns out, the right to dissociation (thanks, Lincoln). Once certain men were successful in establishing a centralized federal government that superseded the original thirteen sovereign colonies - now "indivisible" states - the stage was set for Leviathan to grow, metastasize, and suffocate individual liberty in the name of democracy - the bane of Western civilization.

As Christian anarcho-capitalists, we don't advocate for lawlessness (colloquial anarchy). Our concern with the Constitution and the democratic-socialist government it created shouldn't be taken as opposition to Americans or the land in which we call home. We argue we are the most patriotic of all Americans, as we are most in line with the American spirit that founded the original, voluntary confederation of sovereign states. We only want for liberty and respect for property rights to govern the people here, not an unchecked, legislative, monopolistic system of government inherently designed to impose its will upon individuals to do as it pleases with no recourse from those it oppresses.

Recognizing the error of the Constitution is not anti-American. It’s pro-liberty [and honest], which is the true American spirit. We need not a government more faithful to the Constitution, we need governance that doesn’t violate life, liberty, and the pursuit of happiness - and that can’t happen under the US Constitution.