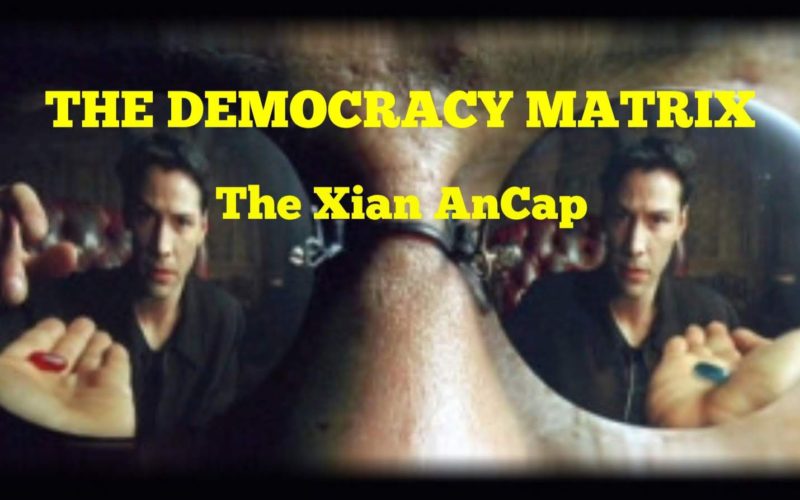 Hopefully you’ve seen The Matrix to get this concept, but just in case you haven’t Wiki gives this brief synopsis:

[The Matrix] depicts a dystopian future in which reality as perceived by most humans is actually a simulated reality called "the Matrix", created by sentient machines to subdue the human population, while their bodies' heat and electrical activity are used as an energy source. Cybercriminal and computer programmer Neo learns this truth and is drawn into a rebellion against the machines, which involves other people who have been freed from the "dream world".

In short, Morpheus - deemed a terrorist by the cyber state - offers Neo a red pill or a blue pill. The red pill would show Neo the truth about “the Matrix,” while the blue pill would keep him dreaming in a false reality. Neo chooses the red pill, of course, and is awakened to reality as it is in that world. This brings us to our world of “The Democracy Matrix” and the red pill that can wake one out of that horrible nightmare.

This week, half the country that makes up We the People™ is foaming at the mouth to keep Judge Brett Kavanaugh from being confirmed to the US Supreme Court. The other half is doing what it can to fight off the rabid donkeys. I’m speaking generally here, of course.

Whether it’s WWIII fighting over who will sit in the vacant 9th seat of the national court of federal tyranny, or whether it’s culture wars or a bazillion issues that comprise battles over property rights or invented property rights the SJWs are usually after, these United States of America (and when was the last time you heard “these” in reference to USA?) are inflamed. To be sure, it's really a conflagration. But we are told this is what democracy is all about. It's what it looks like, said endearingly. It’s why we have “the privilege” to vote so that we can do our part in promoting what we believe, or what we believe to be “constitutional.” As if it is honorable to make people slaves of other people’s wills. It doesn’t matter if you call this system a constitutional republic or a democratic republic, it's a functional democracy. There might be politicians voted in to represent “the People™,” but they are supposedly carrying out the will of their majority constituents. It’s more likely they are carrying out their own agenda for political and financial gain in most cases. Regardless, it’s a system of majority rule, whether directly or indirectly it doesn’t matter. Whatever country the Consitution was supposed to create, under whatever system it was to be, it's either been a failed experiment or complete success.

Yet talks of decentralization and peaceful secession are shunned, even mocked, by adherents to the system. The State has trained them well. Of course the State, even of a country founded upon the very principles of decentralization and secession, would resist any notion of such. The War of Northern Aggression and its aftermath proves as much. "Indivisibility” of the 50 states has been branded into the minds of Americans, thanks, in part, to the Pledge™. But I digress, and I’m getting long here.

The point I’m trying to drive home is that being at other people’s throats constantly is not in any way an expression of liberty. Neither is any expression of collectivism or imposing one's will upon other people. Liberty is about individualism. It is about free association and dissociation. It’s about owning property and using property without violating other people’s property rights. Democracy inherently violates all of these expressions of liberty. Democracy creates bullies - bullies who will do anything to get their way, as we see in the news each day.

I'm here to tell you - the writing is on the wall, in fact - the current political climate is here to stay. It will certainly get worse; how can it not? Yet, millions of red and blue Americans will continue "fighting for America," whatever that means. Their fight for democracy is exactly what the American State wants, because democracy is the only thing that keeps the American State alive. Through its regulation of education and press media cronyism, the State strives to keep Americans in that coma, in that "dream world."

If I could give the reader a small bit of advice: stop believing in the State. Stop believing in the democracy that fuels it. Stop trying to control people or what they do with their property. Stop wanting to impose your will on others. Stop believing the world will crumble if you don’t have government to provide everything for you, whether roads, education, sustenance, whatever. If you can begin thinking for yourself, whether you’re a Republican or Democrat, and believe in the true American ideal of individualism, then you can begin discovering liberty as it truly is.

If you want some help with that, or think you’ve been persuaded enough to take the red pill, I encourage you to begin where I did with this short essay on what libertarianism is. After that, you might consider reading Frederic Bastiat’s The Law and Lysander Spooner’s No Treason: The Constitution of No Authority, or perhaps even Murray Rothbard's Anatomy of the State. But do this only if you desire independence from the State, and only if you want to wake up from The Democracy Matrix.